How economic fairness can win back disenchanted voters?

At this panel event we will be joined by Eric Protzer and Paul Summerville, to discuss their new book Reclaiming Populism: How economic fairness can win back disenchanted voters, speaking alongside Nick Timothy, Former Downing Street Chief of Staff, and Paula Surridge, Senior Lecturer at the University of Bristol and Deputy Director of UK in a Changing Europe.

This event will consider the relationship between opportunity and income inequality, and the impact this has had on recent populist upheavals.

You can watch a recording of the event here.

As Onward’s research has shown, voters are looking for a government that will protect them and their families, and provide a greater focus on place, community and security – what we call the “politics of belonging”. Two-thirds of people believe that “globalisation has not benefited most people” and three-fifths say that “on the whole, jobs and wages have been made worse by technological change”. 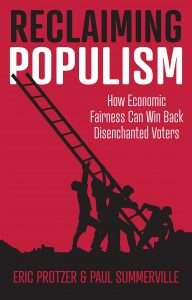 Join us with Reclaiming Populism authors Eric Protzer and Paul Summerville to discuss the forensic original research that underpins their work.

Cited by the UN and IMF, to demonstrate that illiberal populism strikes hardest when success is influenced by family origins rather than talent and effort.

Protzer and Summerville propose a framework of policy inputs that instead support high social mobility, and apply it to diagnose the differing reasons behind economic unfairness in the US, UK, Italy, and France.

By striving for a fair, socially-mobile economy, they argue, it is possible to craft a politics that reclaims the reasonable grievances behind populism.

Reclaiming Populism is a must-read for policymakers, scholars, and citizens who want to bring disenchanted populist voters back into the fold of liberal democracy.

“You think income inequality causes populism? Think again! Reclaiming Populism convincingly argues that the issue is not how unequal income is, it is the lack of social mobility. Unlike so many books on populism, the authors propose a policy agenda to guide action so that accidents of birth do not determine a person’s chances in life.”
Ricardo Hausmann, Harvard University

“A deeply researched and trenchant examination of the economic forces that have led to populist movements in North America and Europe. Critically, the authors lay out how crucial it is for policymakers to create economic policies that are widely perceived by citizens as fair, stressing the vital importance of equality of opportunity for all.”
Bill Powell, Chief Washington Correspondent, Newsweek Magazine


“This clearly written and well researched book offers a fresh perspective on our current political malaise.  It argues that an old-fashioned virtue – fairness – offers the way forward.  Increasing equality of opportunity and social mobility  is the road back to prosperity, pluralism and democratic resilience.”
Rod Tiffen, University of Sydney


“Controversial and self-consciously provocative to be sure, this is a timely, thoughtful, original and even brave book that should be read by all those troubled by the rise of populism and the worrisome state of contemporary democracy.”
Chris Watson, Former National Director, New Democratic Party of Canada

“A expert and even-tempered dissection of the myths of populism. It exposes the fundamental tensions that underlie the twin ideals of freedom and equality. By highlighting the crucial difference between equal opportunity and equal outcomes, the authors show how economic fairness is the best resolving chord.”
John Brodie Donald, Author of Catataxis: When more of the same is different


“This deep, data rich analysis of the root cause of rising populism ekes out a more subtle but profound answer to the dilemma of our age. To paraphrase Bill Clinton’s 1992 campaign strategist James Carville, “It’s fairness, stupid.” With a profound understanding of our natural Fairness Instinct as its foundation, this important book brings the current system’s flaws into sharp relief. Any politician wishing to find the centre of political gravity should read it.”
Andrew McNally, CEO of Equitile Investments and Author of Debtonator – How Debt Favours the Few

Private Roundtable: Auto-enrolment in 2030: What is the next stage for pensions reform?

Science and Technology
Join our panel of experts as they react to the Science Minister’s speech and set out their views on the future of the UK’s international science strategy.
Jan 11
10:15-
11:15

Science and Technology
Join Science Minister George Freeman MP for an exclusive speech on the government’s plans to make the UK a science superpower.
with:
George Freeman MP
Jan 10
18:00-
20:00

The Future of Conservatism: Nick Timothy in conversation with Michael Lind