On Friday 31 May, Onward will publish Firing on all cylinders, by Neil O’Brien MP.  The report sets out a bold plan for trickle-up growth – to make sure all areas and all groups in our society share in the benefits of a growing economy, with higher employment and incomes for families that are less well off today.

“Neil is one of the Conservative Party’s great thinkers – and this report will kick start a debate the party needs to have. I want this leadership election to be a positive contest of ideas, and I’ll be looking very carefully at the recommendations made in this report. We need to show that it’s the Conservatives who offer the best alternative to Jeremy Corbyn as we set out a positive vision for the future of the UK.”

“The great challenge of the 2020s will be to win the battle for free enterprise once again and keep the hard left out of Downing Street. To win the case for capitalism we must deliver higher pay and rising living standards, using the fruits of a strong economy to help people be better off, reach their aspirations and lead more fulfilling lives. To do that the next Prime Minister should keep debt falling while putting pounds into people’s pockets, properly funding public services and providing the jobs of the future that can keep our country prosperous.”

“This is an inspiring vision for how we get the economy moving post Brexit.”

“As Conservatives we will only succeed if we show we have a positive, uniting vision for the whole of the UK – leaving no one, and no place behind. The ideas in this report are a really important contribution to that discussion. It is only by building a strong, balanced economy, and investing in our public services that we can ensure everyone can have the opportunity to get on in life and do well.”

“I welcome this report from Onward which has exactly the type of thinking we need to rebuild our Party, reconnect with the public and take the fight to Corbyn’s Labour Party. The priorities set out in this report are precisely the ones that most people will recognise.”

1. We need a new approach to the public finances, including a new fiscal rule

After nine years of difficult decisions, substantial headroom has opened up in the public finances.

The current fiscal plan is set to drive down government debt as a share of GDP from 83% to 73% GDP over the next five years.

Neil argues there is scope to cut taxes while increasing spending in the near term while keeping debt as a share of GDP falling.

The current set of fiscal rules and the plan to reduce debt sharply should be replaced with a more expansive single fiscal rule: to keep debt to GDP falling gently in normal years when there is no recession.

2. After nine years of reducing the deficit, we need to invest in key public services

After nine years of reducing the record deficit, there are a wide range of demands for public spending including schools, the police, prisons, adult and children’s social care and there is now the headroom to invest in these areas.

Neil argues that the 2019 Spending Review should aim to meet some of these pressures. In particular it should return school funding to its 2015 record level of real spending per pupil, provide for sustained recruitment into the police budget, enable growth in officer numbers, and increase investment in prisons. 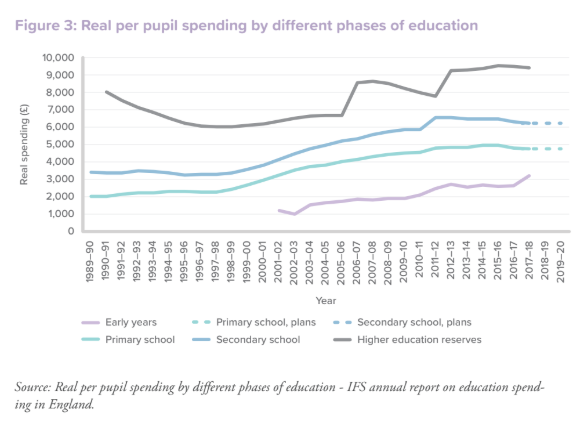 Per pupil spending reached a record peak in 2015, but has marginally declined since.

3. We must tackle Britain’s chronic low productivity and attract new ideas and investment – especially by helping poorer areas to grow

As well as meeting the pressures for more spending on services, Neil argues that we should use this moment to invest in Britain’s competitiveness – and do so in a way that boosts the performance of lagging areas. We should do this by aligning our Corporation Tax with Ireland, learning from the way the Republic has transformed Ireland’s productivity since the change. 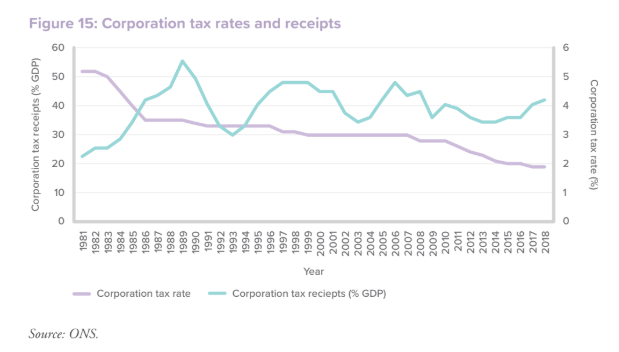 We should also introduce more generous capital allowances across the country to help re-balance the economy and we should re-balance the Government’s own growth-enhancing spending in innovation, transport, housing and culture to lift the performance of poorer areas. 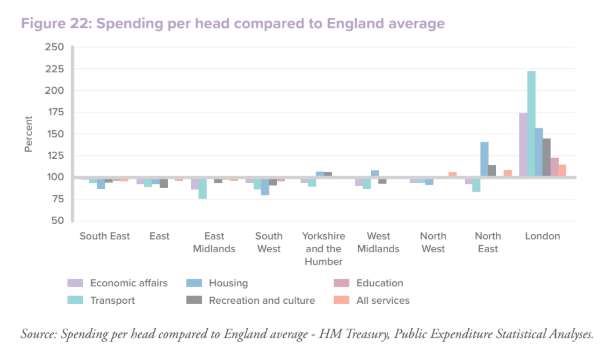 Government spending is heavily weighted towards London and away from areas such as the Midlands, South West and the North West.

4. We need to do more to boost employment and raise the incomes of less well-off families.

To help ensure that more families strongly feel the benefits of a growing economy, and to grow employment even more, the Government should further reduce tax in ways that are focused on lower income working families. 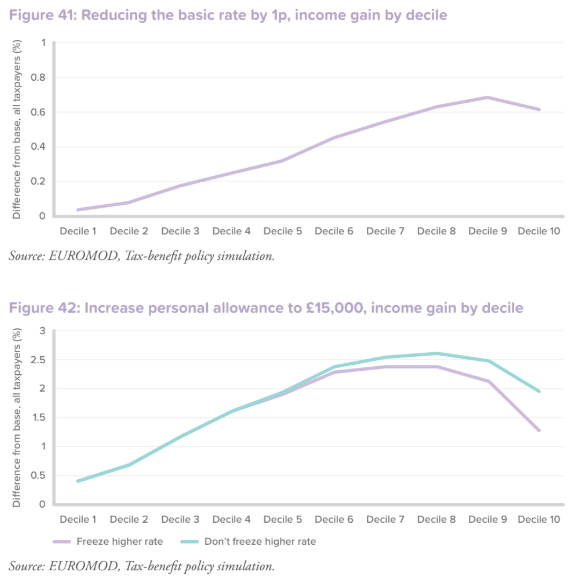 The benefits of a 1p reduction in income tax are vastly outweighed by the potential benefits of increasing the Personal Allowance threshold to £15,000.

To ensure more families feel the benefits of a growing economy, the Government should increase the Primary Threshold for National Insurance contributions for people with children to align it with the rising Personal Allowance for Income Tax, at around £13,000. 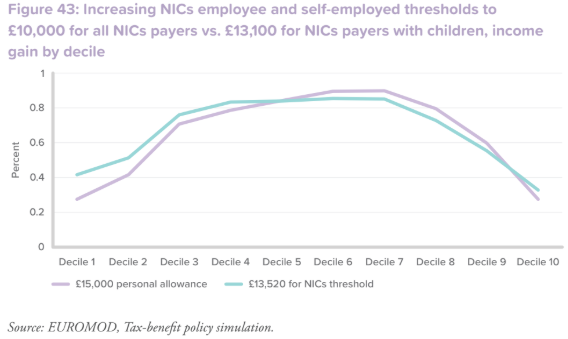 An increase in the NIC thresholds is beneficial for all earners, but has the highest appreciation for those on middle incomes.

For poorer families, the Government should turn Universal Credit into “UC Plus” by substantially increasing work allowances and creating a separate work allowance for second earners.  This would both directly raise the incomes of poorer working households and increase work incentives and employment. The Department of Work and Pensions (DWP) should also develop options to increase Work Allowances further for families with larger numbers of children. 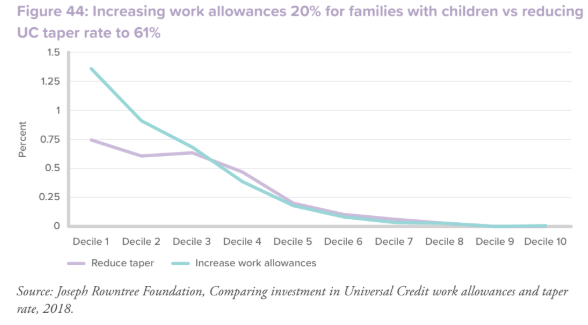 Increasing work allowances by 20% benefits the lowest deciles by nearly twice as much as reducing the Universal Credit taper rate to 61%.

The report argues that if we take decisive action in the 2019 Spending Review we can build not just a strong economy, but a strong economy in all parts of the country. This would be a country where all parts of society feel the benefits from growth – an economy that is really firing on all cylinders.