The report considers why age has become the key dividing line in British politics, what has happened since the last general election, and what we can do to win over millions of younger people deserting the centre right in considerable numbers.

It is the result of a detailed 10,000 sample poll, conducted by Hanbury Strategy, and the largest study of the generation gap since age became the key political dividing line in British politics.

The report takes as its starting point the extraordinary age gap that emerged in 2017.

Younger and older voters have always been politically different, but never by this much

In 2017, the gap between younger and older voters was 50 points larger than the post-war average since 1945 and five times higher than 2010. But it started in 2015, before both Brexit and Jeremy Corbyn became leader.

We reveal today that this gap has grown, not narrowed, since the last General Election. 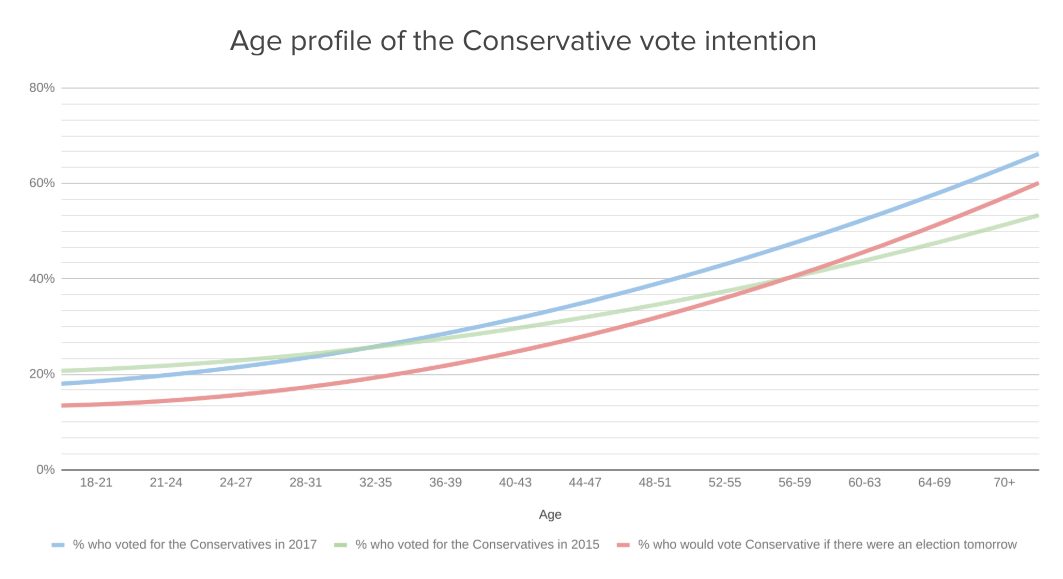 However, this is largely down to the Conservatives’ failure to win over younger voters. 28% of under-35s would consider voting Conservative, but fewer than 17% say they would do so if an election were held today.

This amounts to 3 million voters young Conservative considerers which could be won over but currently would not vote for the party.

This is a considerable opportunity for the Conservatives – and reinforces Onward’s mission to renew the centre right for the next generation by generating fresh modernising ideas and reaching out to new groups of people. In the report, we explore young people’s political attitudes, their values and their views around specific policy issues in great detail.

On the back of the analysis, we are setting out a Ten-Point Plan to rejuvenate the centre right and build a mainstream coalition of voters from both older and younger generations.

On Sunday 7 April, the report was backed by a number of senior Ministers and MPs, including the Matt Hancock, the Health Secretary; Sajid Javid, the Home Secretary; Michael Gove, the Environment Secreraty; Liz Truss, the Chief Secretary to the Treasury; Penny Mordaunt, the International Development Secretary; Dominic Raab, the former Brexit Secretary; and Rt Hon Jeremy Hunt, the Foreign Secretary.

On Monday 8 April, 42 Conservative MPs from the 2015 and 2017 intakes issued a united call on the back of the report for the Conservative Party to broaden its reach ahead of the next general election. They said:

“New polling for Onward shows that there are three million young people who say they would consider voting Conservative – but are not currently planning to. The party needs to reach out to these missing millions.

“The next Conservative manifesto must have strong policies to help young people get on in life. It must reach out to all parts of the country and all communities too. The Conservative party is at its best when it is a party for the whole nation.”

The full list of new intake MPs is as follows: