On Wednesday 3rd July we publish Human Capital by Will Tanner, Guy Miscampbell and James Blagden. The report sets out how technological change will entrench Britain’s regional and political divisions unless the next Prime Minister pursues radical policies to retrain millions of workers.

While most studies of automation have focused on the number of jobs at risk from robots, this report examines which people and places are most likely to be hardest hit by automation. The results clearly show that technological change is compounding society’s divisions, with dire political consequences:

● Low skilled workers are much more likely to suffer from automation. More than a quarter (27.5%) of workers with low or no skills are employed in roles that have shrunk in the past six years and likely to be automated in the future.

● These workers are overwhelmingly located in areas that are already struggling. The ten local authorities where people are most at risk of automation are fewer than 60% as economically productive as the ten least at-risk areas. Fewer than 10% of the population of the City of London work in declining industries, compared to up to a quarter in places like Knowsley, Stoke-on-Trent and Merthyr Tydfil.

● At-risk workers are more likely to be women and from an ethnic minority. Only 2 in 10 women work in industries with growing employment, compared to 4 in 10 men. Regardless of how educated they are, black women are less likely than any other group to be working in a growth industry.

● Local areas with high automation risk are statistically far more likely to have voted Leave in 2016. Of the 50 local authority areas with most risk of automation, 48 voted for Leave in the 2016 Referendum and 43 voted for the Brexit Party in the European Elections in May. The list of areas most affected by automation includes many of the likely target seats for the Brexit Party in a future General Election, such as Corby, Boston and Skegness, Great Grimsby and Mansfield.

● Of the 50 local authority areas most insulated from automation risk, 42 voted Remain in the 2016 Referendum and 28 voted for the Liberal Democrats in the European Elections in May.

Data visualisation highlights the 2016 Leave Vote, the risk of automation and the Brexit vote in the 2019 European election.

The UK already has some of the biggest skills gaps in the developed world: nearly a third of workers (30%), equivalent to 8.5 million people, are classified as low skilled and the UK ranked 20th out of 33 countries in the OECD for low skills. Since 2011, skills spending by employers per trainee has fallen by 17% in real terms and adult learning participation in the UK is lower than it has been in two decades. This is particularly acute among the largest firms: companies with more than 100 employees spend on average £4,000 less per trainee than firms with 2-4 employees.

Exclusive polling for the report finds that despite 64% of people believe that computers or robots will do much of the work done by humans and 57% saying they think that people will struggle to find employment because of automation, only 21% of workers have gained a new skill in the last year and 23% have never gained a new skill to progress in work.

The report calls on the new Prime Minister to embrace a series of bold reforms to tackle Britain’s long tail of low skills and help people and places at risk of automation, including:

● The introduction of a new Retraining Tax Credit, targeted at low skilled workers, to encourage firms to invest in human capital and boost productivity. This would cost an estimated £0.9 billion per year and could train up to 1.5 million low-skilled workers over five years.

● The National Retraining Scheme should be used to provide a ‘right to retrain’ for at-risk workers, helping them transition into jobs that will not be threatened by automation, funded by a new £1 billion retraining fund paid for through the apprenticeship levy.

● Using repatriated EU Structural Funds from the Shared Prosperity Fund to attract high growth, low risk employment to parts of the country at risk of automation or industrial decline. This could draw on up to £2.4 billion in annual funding, using tax breaks and retraining investment to turbocharge deprived areas, as with Sunderland in the 1980s and Siemens in the 2010s.

The report has received support from MPs and organisations: 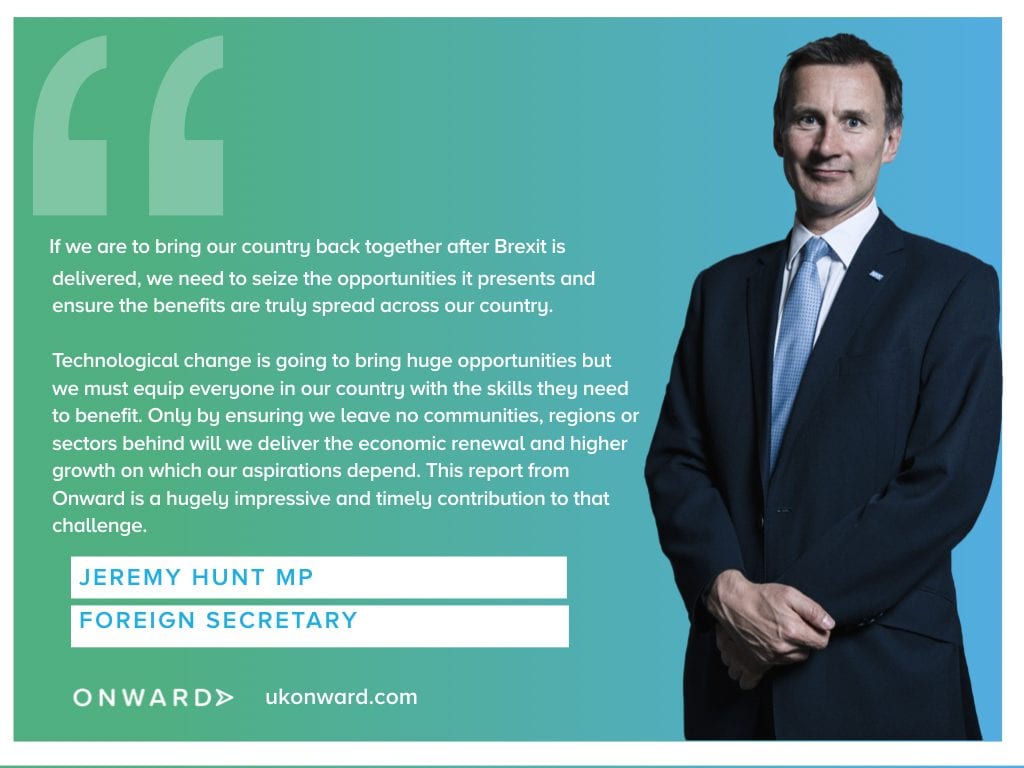 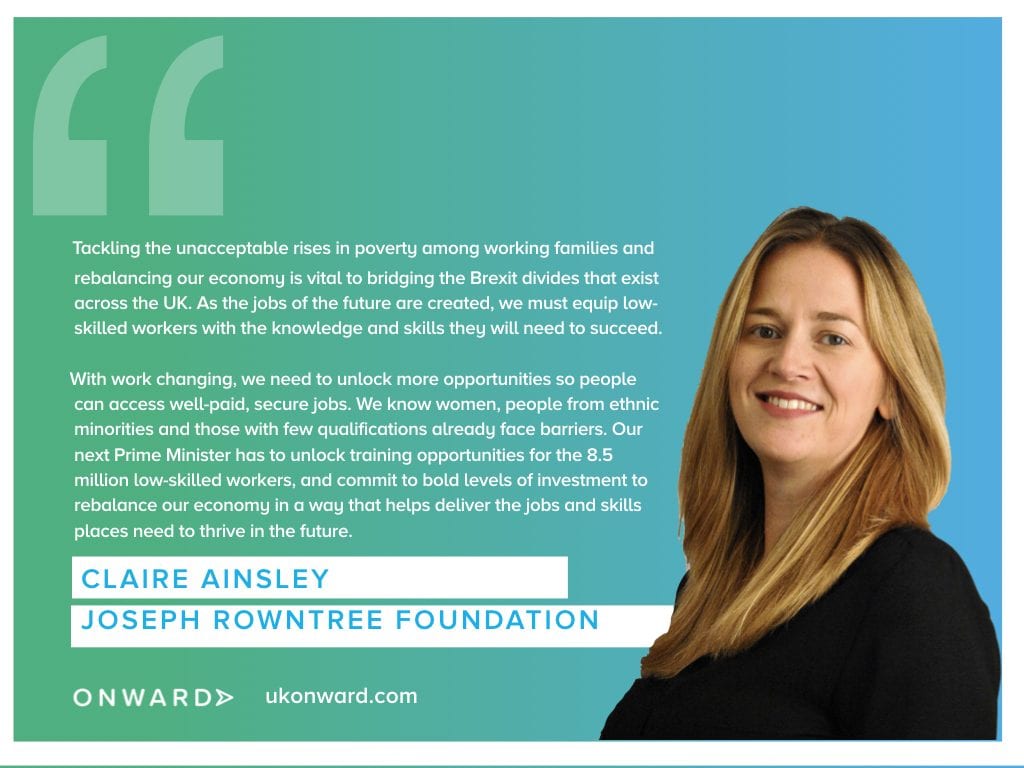 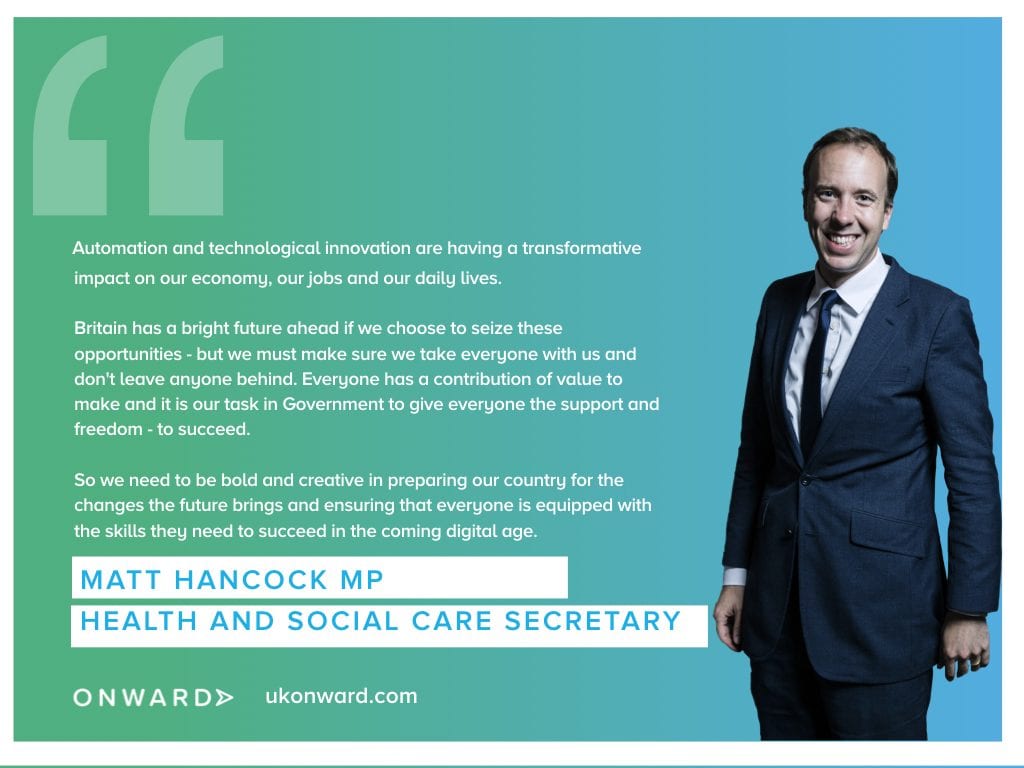