Why we need to harness FDI to drive investment and growth in our lagging regions.
Will Holloway
May 17, 2021
Home
Firm Foundations: Harnessing FDI to level up

This morning Onward published the latest report in our Levelling Up research programme, Firm Foundations. The report finds that foreign direct investment into London tripled between 1997 and 2016, but fell by 15 percent in the rest of the UK over the same period. It therefore calls on Ministers to help lure foreign investment to Britain’s lagging regions in order to boost growth.

It finds that London attracted 1 in 10 of all FDI projects into Europe in 2018 and has tripled its number of investments since 1997, while the number in other regions has fallen . As a result, Greater London’s share of FDI projects has risen from 20% in 1997 to more than 50% in 2016. Meanwhile, the UK has become an outlier amongst other advanced economies as one of the few countries in the G20 not to offer a bespoke investment incentive tax regime for foreign investors, or discretionary funding to attract investment to lagging regions. 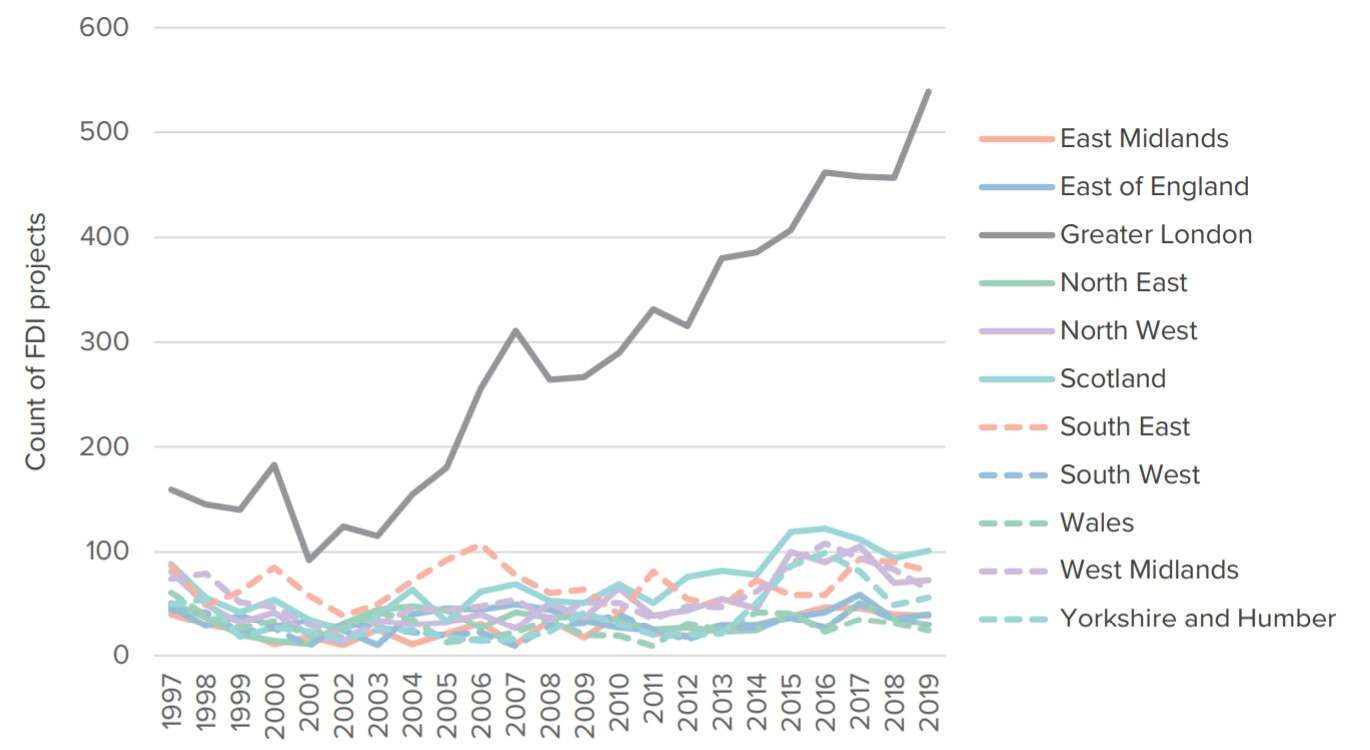 There is accelerating global competition for inward investment. The number of inward investment promotion agencies around the world has increased by over half in the last twenty years. Including,

Previously the UK was constrained by membership of the European Union and detailed EU rules on Assisted Area status. The report argues the government should now use the freedoms of Brexit to pursue a bold inward investment policy focused on less productive regions. This should include:

Rob Largan MP, Committee Member of the Levelling Up Taskforce and MP for High Peak:

“Since 1997, the rest of the country has worryingly fallen behind London when it comes to attracting foreign direct investment. This report makes a strong case for the importance of reversing this trend when it comes to levelling up the whole country. It’s vital that we take the opportunity provided by Brexit and learn the lessons from other countries that have been more successful in attracting foreign regional investment.”

Simon Jupp MP, Member of the Levelling Up Taskforce and MP for East Devon, said;

“We are spreading our wings as a nation and Global Britain should be as much about inward investment as it is international influence. As we assess our newly found freedom to attract investment from the international stage, we must be competitive and keep Britain’s best interests firmly in mind. Every nation and region presents untapped potential and we should grasp the opportunities ahead.”

Richard Holden MP, Committee Member of the Levelling Up Taskforce and MP for North West Durham:

“The investment in Sunderland by Nissan was the catalyst for the transformation of the North East and is now one of the biggest employers of my North West Durham constituents both directly and in the supply chain. It’s clear that in recent decades though this investment has been increasingly centred on London. To deliver transformational levelling up, like I know the Prime Minister and whole Conservative Party want to see, we must seize the opportunities now afforded us to transform opportunities and life chances across Britain.”

Simon Clarke MP, Member of the Levelling Up Taskforce and MP for Middlesbrough South and East Cleveland:

“Onward have designed a very substantial series of recommendations to address a key part of the levelling up agenda: how to ensure foreign direct investment is delivered right across the U.K. London has huge strengths that rightly attract investors, but there are great opportunities across the country and it is vital that we consider all the options to stimulate FDI in left behind areas where it could help to promote growth, jobs and regeneration.  This report has lots of interesting suggestions, including leveraging the role of elected mayors to help champion inward investment.”

Andy Street, the Mayor of the West Midlands, said:

“One of the key reasons the West Midlands was performing so well economically before the pandemic and making up for decades of relative decline was our inward investment performance. Over recent years we have helped attract global brands to our region, bringing with them good quality, well-paid jobs for our residents – alongside the always-welcome jolt in the arm for our regional economy.

“But even with our strong performance we were still lagging a long way behind London, and that was before Covid knocked us for six. In order to recover well from the pandemic and flourish in the future we need to stay competitive and attractive to the rest of the world, but change may well be needed to make that happen. No one knows their region’s economy better than Metro Mayors and their combined authorities, so Onward’s recommendation of devolving further investment responsibilities to Mayoral authorities is a good place to start.

“There are many upsides to making these changes now – not least because of Brexit. Britain’s exit from the European Union and subsequent trade deal has opened up significant opportunities for reshoring and bolstering fragile supply chains. With exporting being such a big chunk of our regional GDP, this is critical to the West Midlands.

“Ultimately if we don’t act and create a more level playing field to secure investment, then the West Midlands will lose out. So would the likes of the North East, the North West, and Greater Manchester. And we wouldn’t just be losing out to London, but to other nations, regions, and cities across the world. In order to be successful UK PLC needs its regions competing on the global stage, not just within its own borders. Moving to a more devolved investment model that matches opportunities with regional needs will allow that to happen, and will also help the Government realise some of its ‘levelling up’ ambitions.

“This report presents a golden opportunity for change that ministers should seize with both hands.”

“Getting good employers into lagging places is the absolute key to levelling up. No amount of government schemes will work if we don’t get private businesses investing in them. But the trend has been for more and more investment to be sucked into the capital, while other countries are tooling up with more and more aggressive policies to grab these mobile investments.

“We need a business-led approach to levelling up.  The Prime Minister should learn from how Mrs Thatcher used incentives to lure Nissan to Sunderland, which ensured thousands of well paid jobs and decades of growth. It was a brilliant investment.

“Because it brings new ideas and higher levels of investment and innovation, attracting inward investment has big spillover benefits which justify going the extra mile. Almost all our competitors now have powerful schemes to attract investment to particular places and sectors, and the competition is getting more intense.  The academic evidence from schemes we’ve had in previous decades shows that investment incentives can increase investment in lagging areas, and that it can be additional and not just move investment around. Now we need to extend the same logic and help more places.

CPC21
with:
Ranil Jaywardena MP
by Will Holloway

If you value the work we do support us through a donation.

Your contribution will help fund cutting edge research to make the country a better place.

Support Onward with a donation

What does Onward polling tell us about Keir Starmer’s Labour Party’s chance of winning the general election in 2024?
by James Blagden
Social Fabric

Good Neighbours: How do levels of hyper-local trust vary and why does it matter?

by James Blagden, Luke Stanley
Getting to Zero

Green Jobs, Red Wall: Why green industrial jobs are critical to Levelling Up

This report explores the potential for green industrial jobs to boost Levelling Up, and the race against time the UK faces to secure them.
by Ed Birkett, Alex Luke, Phoebe Bunt
Social Fabric

How to reform R&D Tax Credits to incentivise innovation when public finances are stretched.
by Matt Burnett
Levelling Up

Beyond School: The Case for School Enrichment

Why we need a new approach to school enrichment
by Francesca Fraser, Adam Hawksbee
Future Politics

What does Onward polling tell us about Keir Starmer’s Labour Party’s chance of winning the general election in 2024?
by James Blagden
Social Fabric

Good Neighbours: How do levels of hyper-local trust vary and why does it matter?

by James Blagden, Luke Stanley
Getting to Zero

Green Jobs, Red Wall: Why green industrial jobs are critical to Levelling Up

This report explores the potential for green industrial jobs to boost Levelling Up, and the race against time the UK faces to secure them.
by Ed Birkett, Alex Luke, Phoebe Bunt
Social Fabric

How to reform R&D Tax Credits to incentivise innovation when public finances are stretched.
by Matt Burnett
Levelling Up

Beyond School: The Case for School Enrichment

Why we need a new approach to school enrichment
by Francesca Fraser, Adam Hawksbee