This report should provide the Government with confidence that the net zero agenda does not appear likely to become a significant dividing line in British politics. Voters are near-unanimous in their belief of the need to act with urgency and the benefits of doing so. But it also uncovers some hard truths. There is real concern about how much the transition will cost voters, and how they may need to change their homes. Striking the right balance between decarbonising at pace and protecting consumers will be key.

Voters overwhelmingly support tackling climate change, but enthusiasm is undermined by the costs of what it will take to get to net zero.

This major new study interrogates public attitudes towards net zero, finding that while concern for climate change was once a concern of the few it is now ubiquitous across generations, income groups and the electorate. But how deep does this concern go? 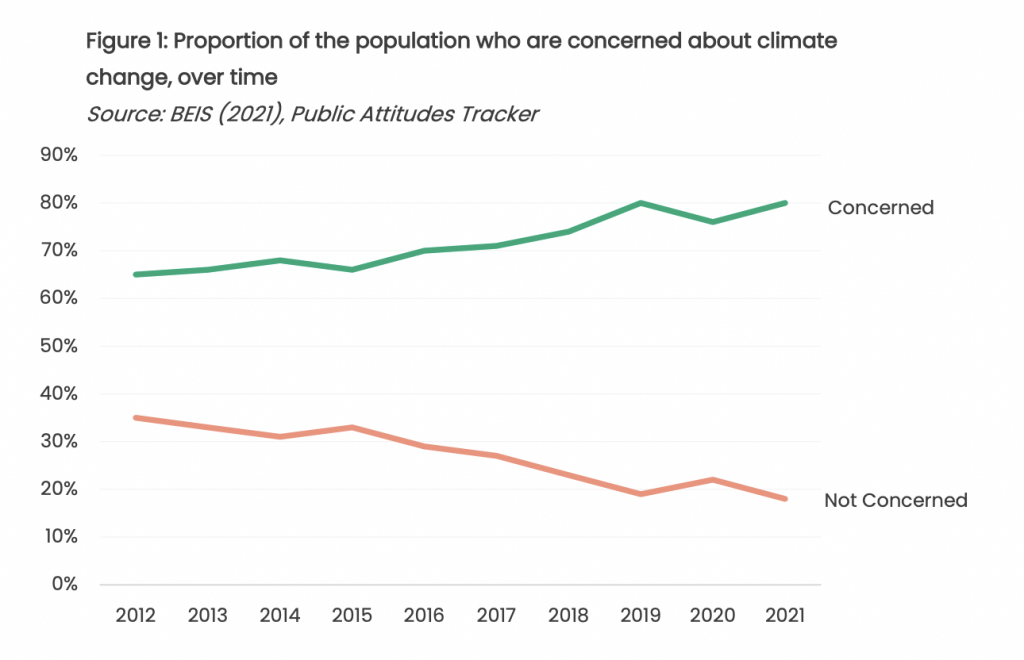 The study finds that two thirds of voters (67%) think the Government is not being bold enough in tackling climate change, while 78% believe that if we put off action on climate change now, it will be more costly in the future. Voters from every age group, ethnicity, region and social grade, as well as both Leave and Remain and Conservative and Labour voters support bolder action in principle.

But support in principle softens in practice, particularly when people were questioned about making changes to their homes. Only 46% of those surveyed said they were “happy to pay higher prices for fuel and household items if it leads to less carbon being emitted into the atmosphere”, with nearly two thirds (64%) of 2019 Conservative voters opposed.

This was clear when we tested certain policies, both with and without the costs attached.  For example, net support for making every household install insulation and double glazing falls from +36% blind to -12% when the estimated cost of £8,000 per household is revealed.

The political geography of net zero

We use our Net Zero Index to analyse the political geography of net zero, creating robust estimates for net zero support in every constituency in the country, and for different groups of voters. This reveals that:

Will Tanner, Director of Onward, said:

“Net zero is not just an environmental challenge, it is also a political one. At the moment, voters not only support ministers in their efforts to decarbonise the UK by 2050, but want the Government to be more ambitious and urgent in their approach.

“But the new climate consensus is more fragile than it appears. Voters’ enthusiasm starts to ebb when confronted with details of the costs and disruption, and there is deep scepticism of the commitment of other countries.

“This makes negotiations in COP26 in Glasgow all the more important – not just to secure international commitments, but also to generate the investment and innovation needed to cut costs and prevent green policies pushing families into the red.”

Will Tanner also appeared on GB News, to discuss the findings from the report:

J.L. Partners surveyed 8,478 people in a representative UK sample between 11 and 30 August 2021. The full tables will be available at www.jlpartners.co.uk within 48 hours of publication.

This report is produced as part of our Getting to Zero research programme.

Practical and popular ways to decarbonise the economy.

Established a year before COP26, Onward’s Getting to Zero programme is dedicated to developing practical and politically possible ways for the UK to meet its net zero ambitions and lead the world in decarbonisation.

Read more in Getting to Zero: Greening the Giants | Qualifying for the Race to Net Zero

If you value the work we do support us through a donation.

Your contribution will help fund cutting edge research to make the country a better place.

Support Onward with a donation

Levelling Up Pensions To Boost Savings By £2.8 Trillion

How pension reform can boost opportunity for poorer workers and regions.
by James Blagden
Social Fabric

Global Britain: How should the UK approach reforms to international corporate taxation?

The case for a broader and deeper family tax allowance
by Luke Stanley, Will Tanner, Fjolla Krasniqi
Social Fabric

The case for empowering neighbourhoods as well as regions
by Jenevieve Treadwell, Will Tanner, Luke Stanley, Fjolla Krasniqi
Getting to Zero

How to drive innovation to meet net zero
by Alex Luke, Ted Christie-Miller
Levelling Up

Levelling Up Pensions To Boost Savings By £2.8 Trillion

How pension reform can boost opportunity for poorer workers and regions.
by James Blagden
Social Fabric

Global Britain: How should the UK approach reforms to international corporate taxation?

The case for a broader and deeper family tax allowance
by Luke Stanley, Will Tanner, Fjolla Krasniqi
Social Fabric

The case for empowering neighbourhoods as well as regions
by Jenevieve Treadwell, Will Tanner, Luke Stanley, Fjolla Krasniqi
Getting to Zero